The BX 16valve Racecar and Team

The race team consists of:

Team BX Sport was really born in late 2002 although the team’s Citroen BX 16valve had been raced before, way back in 1993, in the Auto Express Thundersaloon championship, where it had finished in the top ten of all its races bar one due to a driveshaft failure.

It was driver and team principal Gary Cole who set up the team with his friend John Witty after reading an article about the Classic Thunder championship. In 2003 “Bertie” as the car had become known won his class and took the runner up spot overall. In 2004 and 2005 on its way to 2nd in class the BX took more class wins and set several more lap records but reliability was an issue as the need for speed grew. The team had now grown to include Rene duBern as trackside camera operator and general helper.

2006 saw the team move to the Dunlop Track and Race saloon championship where reliability rewarded the team with 2nd in class C. Rene was now assisting John on raceday.
Bertie must have wondered what he had done wrong as once again he disappeared under a tarpaulin.

In 2012 the cover was removed. John had died in a road accident the previous year so Jack Kirby, once apprenticed to John, and as a tribute to him, agreed to help with the car for the one off event on the Brands GP circuit. In 2013 the team entered the Quaife Modified saloons and picked up third in class at season’s end. In 2014 the team were back again and went one better to finish 2nd both times finishing in the top ten overall.

The car has been stripped down to a race weight and has even had all of the underseal and panel sealant removed for the process of weight reduction.

The engine is still the BX 16v unit but it has benefitted from the knowledge of John Witty who has a wealth of experience in racing circles and the suspension is set up to suit the extra power and loss of weight. 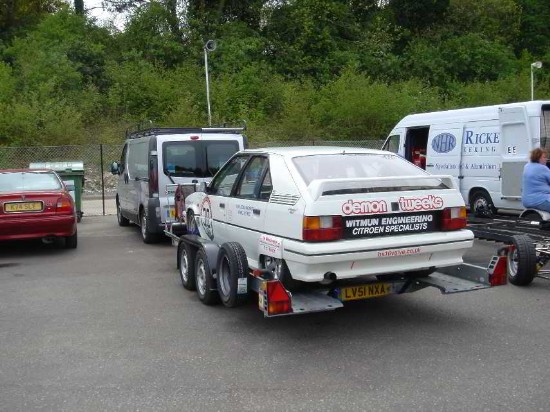